It is morning and I am sitting in my house (HA! MY HOUSE!!). Even though the sky is gray, the air is clear and cool, and my windows are open (HA! My WINDOWS ARE OPEN).  It is so quiet here, I can hear the crickets singing, children playing and the occasional beep beep of a truck in reverse.  Today is our first full day in our house.  We've been in a hotel up to now, so even though we've been here a month, it's only now that we are really experiencing life as we will know it.  Some things are strange- (did I mention how quiet it is?) I made dinner last night without soaking veggies and I used water from the tap - weird.  Some things are the same, I made something familiar (barley capanota), in my trusty old pots and pans. 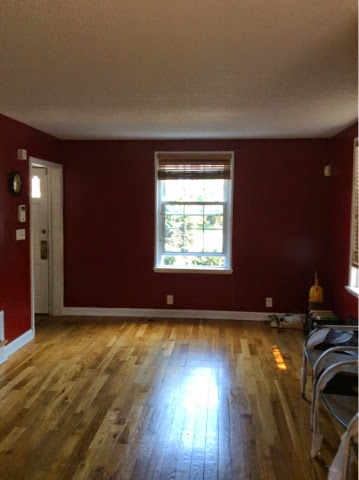 This has been a different transition for us, this is the first time we've arrived at post and had to live in temporary quarters.  We don't have a social sponsor to show us the ropes, and I've had to do the make ready myself, there's no office to call to sort out the little kinks that every new place has.  But I did get to paint!  Our house has so many bright colors I'm sure people are going to walk in and think I am nuts, but I love each and every brightly colored wall (they are still bare, the majority of our household goods are still making their way from China). 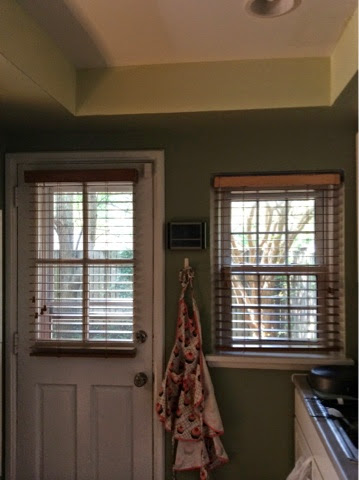 But in many ways this is like moving to a new country.  I'm still getting used to the prices, the unusual local customs (people stop for pedestrians that are not even at the crosswalks yet), and the rhythms of life in this new place.  I've already found the grocery store, the school, and figured out how DH was going to get to work, I'm now working on finding a community to join so that we can make some friends around here.
ETA- hahaha I just realized that I forgot to say that we are back in the US in the DC metro area.  The whole post doesn't really needs that small piece of info to make it more understandable.
Posted by Unknown at 01:59 3 comments:

So I can't decide what I want to do with this blog.  I've taken a billion pics with the thought that I was going to post about them... but I haven't.  I think my negative China attitude has something to do with it, and maybe I'm experiencing a form of writer's block.
But maybe it's time to try something new.  I've been inspired by the 365 grateful project.  I probably won't post everyday, but I will try to find something to be happy/grateful/inspired every day. 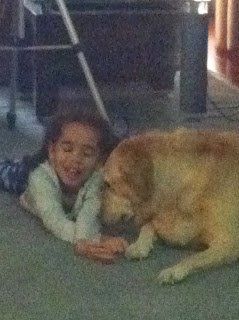 This is a horribly blurry picture, but I am grateful for the love between Babes and her Honeydog.

Email ThisBlogThis!Share to TwitterShare to FacebookShare to Pinterest
Labels: grateful

I've been feeling a little bleh about my blog lately.  It's not that I haven't had ideas to write about, I've taken tons of pictures of interesting things with an idea to blog about them, but....  I don't know.  I just haven't wanted to write.  Part of the problem is that the weather has turned cooler and also grayer.  I think another problem is that we got our next assignment.  (USA 2014 BABY!) The Foreign Service lifestyle is good and bad.  I have many expat friends and it seems that knowing a year out approximately when you are going to leave, and where you are going is a rarity.  In some ways it's awesome to know that they are not going to tell me to be out of China by the end of the month (or in 2 weeks as I have heard happening).  It is also awesome to be able to plan for tricky assignments; read up on schools, figure out what we should take, do some seasonal shopping, etc.
On the other hand, I KNOW that a year from now I am going to be in Washington DC (well, maybe).  So Wuhan no longer holds a great deal of attraction.  It's like having senioritis, but it happens every two years.  I could make new friends, but I'm leaving in a year, I could go explore a new part of the city, but I'm leaving in a year....  See how that could become a problem?  It also tends to make me negative about the place I'm living.  Ew, I'm glad I'm leaving, look how they.....
This kind of thinking is a trap.  If you do this, especially in the foreign service on a two year rotation, you never end up liking where you are, but are always looking forward/back.  It is very important to live in the here and now, and not focus on where you were 6 months ago, or where you want to be 6 months from now.
One of the reasons why I write this blog is to help me remember to keep an eye out for new experiences. This lifestyle is a gift, and I should try to keep my sense of wonder about the world around me. 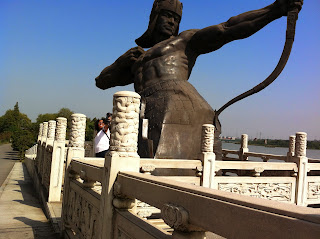 I saw this at Wuhan International Plaza.  I think it was a new shop, offering fur (or fake fur, I didn't go up to feel) for ladies and their pooches.  Babes got a huge kick out of the display and wanted to get a cloak for Honeydog, but, as I pointed out, Honey already has fur (plus the shop looked REALLY expensive). 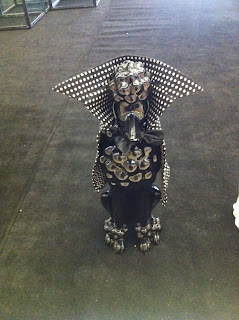 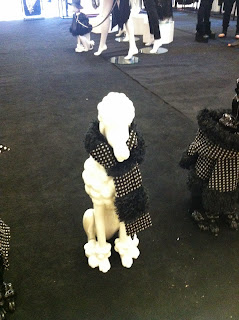 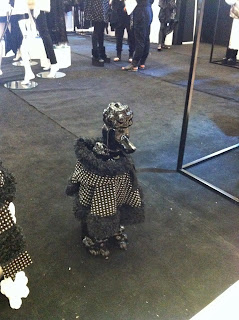 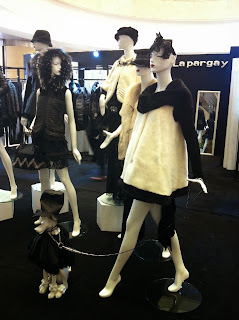 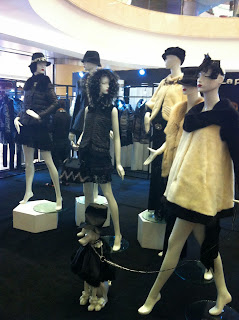 I don't think they were too pleased about me taking pictures, but they were too afraid to come talk to the foreigner.... Yay for me!
Posted by Unknown at 12:00 No comments:

Last week Babes was out of school for the National Holidays.  I was pretty excited I had a whole week with my cutie patootie, all by ourselves (not only was it a holiday, but DH was out of town)!  I had plans to be girlie, but first we set out for exploring.  I've been wanting to go to the Botanical Gardens for awhile now, Babes loves flowers and it seemed like just the place for her.  After checking on my trusty Google Maps, I decided NOT to take the bus (2 1/2 hours!  YIKES) and decided to drive myself (24 minutes!). Well, let's just say that between construction and non-existent roads it took us 3 hours to get there.  Babes was great, she was pretty patient, only pulling out her old lady of endless suffering routine once or twice.  What was so endlessly frustrating is that we were really RIGHT THERE, circling around it for over an hour!  A left instead of a right and we could have saved ourselves so much pain.  But that's neither here nor there. 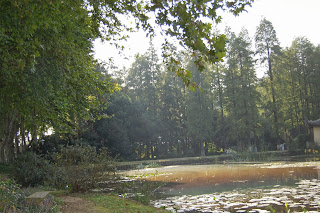 The gardens are stunning!  We were unfortunately not in the right season for a lot of flowers, we must have just missed the lotus blossoms, and were a little too early to smell the Osmanthus, but the gardens were quiet and ethereal none the less.  I wish I was a better photographer, the late September light, as it slanted through the trees and sparkled off the water was inspiring.  I kept expecting to run into a fairy or sprite as we wandered through the trees and across the bridges. 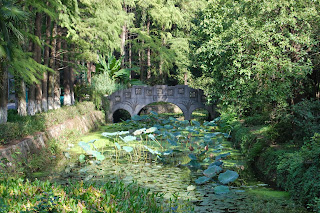 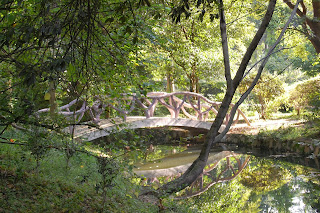 And oh!  The bridges, if I were a painter I'd exclusively paint bridges.  I love the symbolism of the bridge, spanning the space between.  You are not on water, you are not on dry ground, but somewhere in between.  Every bridge, every pavilion we came across seemed prettier than the last.  I can't wait to go back again (hopefully this time with better directions). 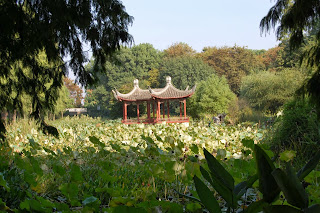 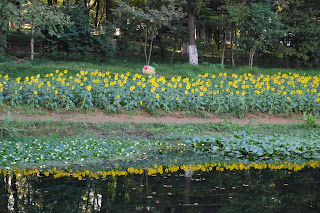 Oh, and one good thing about getting lost, we found this awesome bridge just outside of the butt end of the Moshan park.  Supposedly a rebellion was put down on this spot with a skillfully placed arrow, and they built a bridge to commemorate it.  The archer though is impressive, it looks as if he is rising up out of the water to fire an arrow into the heart of the mountain. 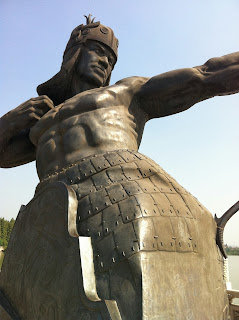